While in orbit over the Brazilian coast, an astronaut aboard the International Space Station took this photograph of some of the country's famous coastal lagoons. This view shows a short 20-kilometer (12-mile) stretch of a lagoon shoreline where pointed sand spits jut into waters of Mangueira Lagoon (Lagoa Mangueira). The ends of the spits are under water, growing less visible with increasing depth.
The space station crew had flown a similar orbital track a week earlier, taking panoramic shots like this one with Lagoa Mangueira on the lower right. They were likely in "discovery mode," looking for features that might be worth tighter shots later in the Expedition.
The spits and bays have a somewhat regular spacing, at least in geological terms. They are created as lagoon water slowly circulates while being driven by persistent sea breezes out of the east (top of the image). The water washes into the bays and then curves back out into the lagoon, carrying sand eroded from the shoreline. This sand is deposited in the tight, tan-colored lines we see as spits. The cells of circulating water tend to be the same size, depending on water depth, dominant wind strength, and the amount of sand available - translating into spits at roughly regular intervals. Regularly spaced spits form in many parts of the world, for instance along the coast of the Sea of Azov in southern Ukraine.
Details in the photo suggest that strong winds from the north (left to right) have swept sand into thin tendrils on the south side of each spit. A single spit, whose origin is less clear, is also visible beneath the water surface of Lagoa Mangueira near the opposite side of the lagoon (top right).
Astronaut photograph ISS043-E-101410 was acquired on April 10, 2015, with a Nikon D4 digital camera using an 800 millimeter lens, and is provided by the ISS Crew Earth Observations Facility and the Earth Science and Remote Sensing Unit, Johnson Space Center. The image was taken by a member of the Expedition 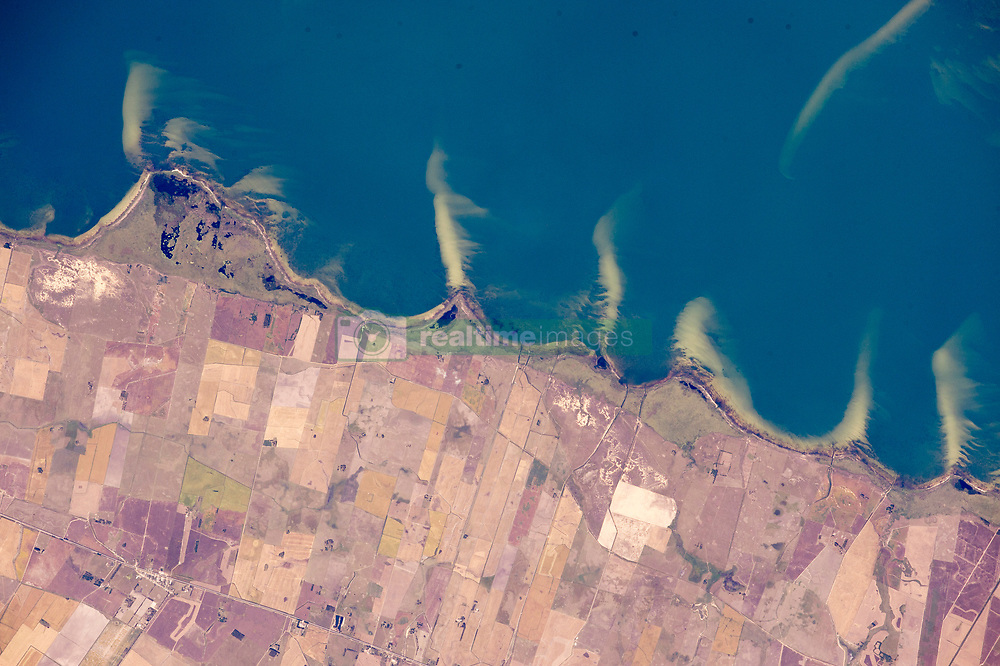