On November 5, 2015, a tailings pond dam failed at an iron mine in southeastern Brazil, sending contaminated water sediment through the nearby village of Bento Rodrigues and into tributaries of the Rio Doce (Sweet River). Tailing ponds store waste left by mining operations - usually slurries of pulverized rock rich in chemicals used to process ore.
The dam failure released about 60 million cubic meters - the equivalent of 25,000 Olympic swimming pools or 187 oil tankers - of contaminated material. Floods killed at least 13 people in Bento Rodrigues and displaced several hundred people in towns and cities downstream.
Contaminated water first moved northeast through the Rio do Carmo until that river meets the Rio Piranga and becomes the Rio Doce. From there, it continued flowing northeast until the city of Governador Valadares, where the Rio Doce makes a turn to the east and heads toward Linhares and the Atlantic Ocean. As heavy mud passed Governador Valadares, a city of 280,000 people, authorities shut off the municipal water supply.
Seventeen days after the dam failed, orange-brown water reached the Atlantic Ocean. Contaminated water continued to flow into the Atlantic on November 30, 2015, when the Operational Land Imager (OLI) on Landsat 8 captured this natural-color image. A muddy plume of water extended several kilometers into the Atlantic Ocean.
According to news reports, the contaminated water contains high levels of mercury, arsenic, chromium, and manganese. Some scientists have expressed concern that toxins - along with a reduction in oxygen available in the water caused by the influx of silt and clay - will cause widespread harm to the river's ecosystems.
Samarco, the company that owns the iron mine, has deployed floating barriers along parts of the Rio Doce in an effort to limit ecosystem damage. The company has also dredged the river's mouth to encourage contaminated mud to flow swiftly into the sea rather than settling at its mouth.
NASA Earth Observator 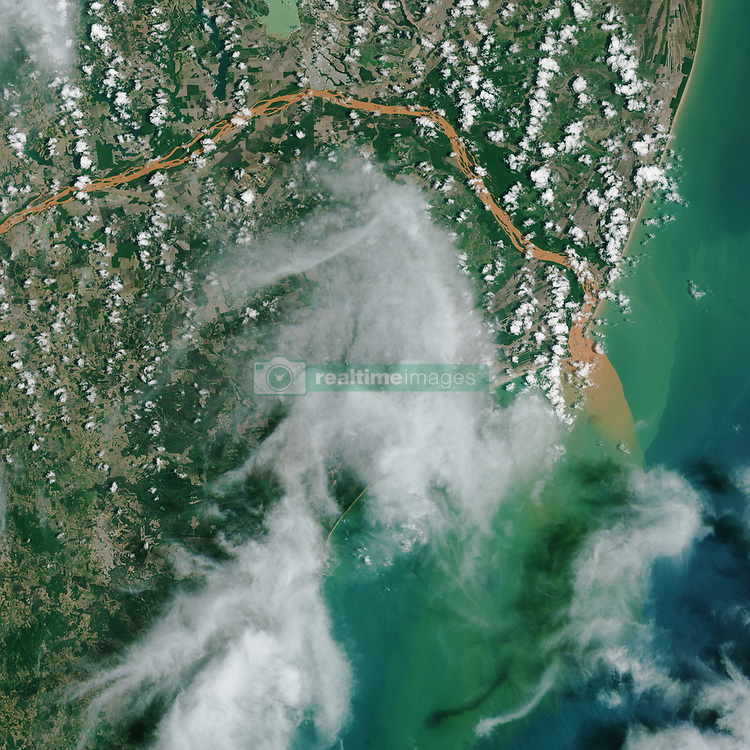