August 4, 2017 - inconnu - Future electric cars could become more reliable â€“ by harvesting power generated by the wheels.The device would help to give electric cars greater range, a problem which makes many people reluctant to take up the technology.Wheel Battery is an award-winning design that provides rapid charging in emergencies.An auxiliary battery gets charged through the electricity generated by the carâ€™s running wheels.The demand for electric cars has been quickly increasing in recent times.But due to insufficient charging points, electric car drivers face difficulties finding places to recharge their batteries. This creates a certain amount of reluctance in people to switch over to electric cars. On average, an hourâ€™s charge on 220V allows an electric car to drive over 10 kilometres. To recharge a car completely, an electric car user would need at least 10 hours of charging time. As an alternative solution, Wheel Battery , created by students at South Koreaâ€™s Hoseo University, has designed an auxiliary battery that can be installed in the wheels.This auxiliary battery functions as an alternative to the car battery when a driver needs to charge the car but no charging points are available. Wheel Battery has been designed so that the user can easily plug in For convenience, the battery status and amount if charge available is also indicated on the exterior of the auxiliary battery.An app would also be able to tell the driver information about the electricity generated.The idea has won a Red Dot design award in Germany. # UNE BATTERIE DE SECOURS POUR VOITURES ELECTRIQUES (Credit Image: © Visual via ZUMA Press) 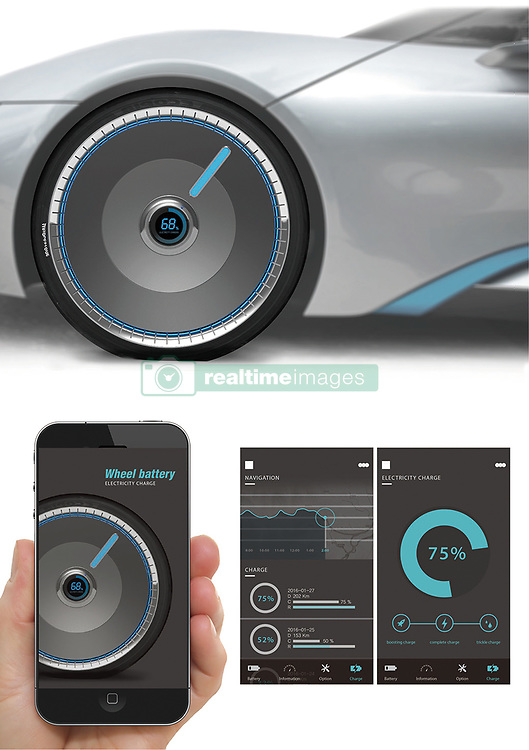