On a clear day, Heard Island stands as a small drumstick-shaped patch of rock and snow amidst a vast expanse of blue. Located in the southwestern Indian Ocean and only accessible by boat, the small volcanic island is situated 4,000 kilometers southwest of Western Australia, 4,700 kilometers southeast of Africa, and 1,000 kilometers north of Antarctica.
When the Operational Land Imager (OLI) on Landsat 8 captured this image of Heard Island, just the tip of Mawson Peak - the highest point on the island - was visible through the sheet of marine stratocumulus clouds swirling over this part of the Furious Fifties. Though just 2,745 meters (9,006 feet), the mountain was tall enough to stir up several cloud vortices that swirled downwind like eddies in a fast-moving river.
Theodore von Kármán, a Hungarian-American physicist, was the first to describe the physical processes that create long chains of spiral eddies like the ones shown above. Known as von Kármán vortices, the patterns can form nearly anywhere that fluid flow is disturbed by an object. In this case, the unique flow occurs as winds streamed around Mawson Peak. As winds were diverted around the mountain, the disturbance in the flow propagated downstream in the form of vortices that alternate their direction of rotation.
Often, von Kármán vortices form relatively straight lines of eddies; in this case, powerful southerly winds appear to be pushing the vortices northward. You can view the scene on the Worldview browser to get a broader view of the vortices trailing north.
References
Department of the Environment Heard Island. Accessed May 6, 2016.
NASA GES DISC Science Focus: Von Kármán Vortices. Accessed May 6, 2016.
NASA Earth Observatory (2002, March 14) A Vortex Street in the Arctic. Accessed May 6, 2016..
JPL History
Theodore von Kármán. Accessed May 6, 2016..
Slate (2013, April 12) The Streets Are Paved with…Vortices. Accessed May 6, 2016.
NASA image by Jeff Schmaltz, LANCE/EOSDIS Rapid Response. 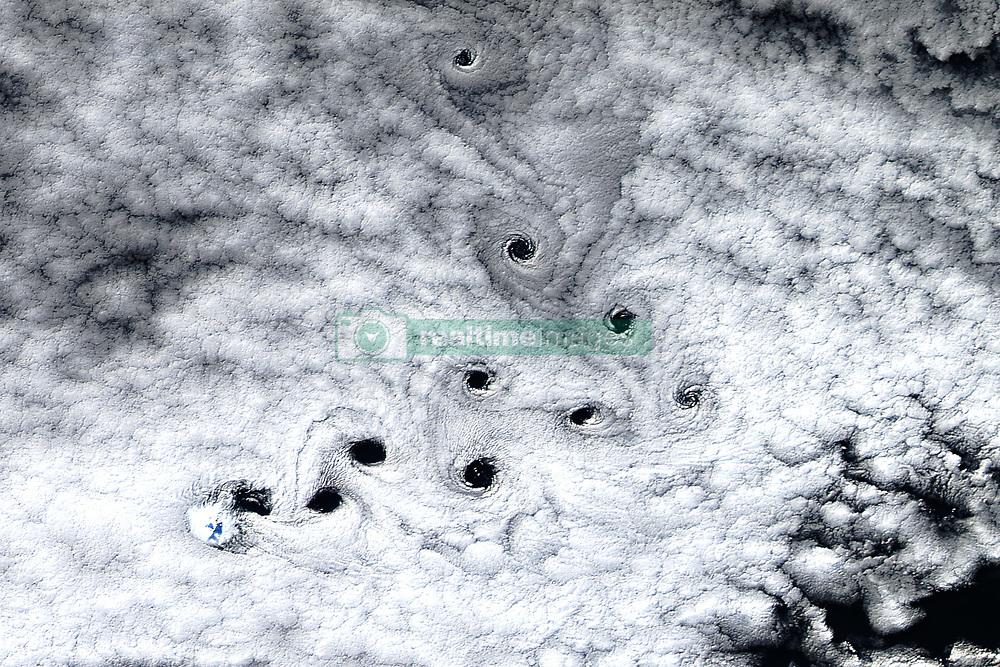