The ocean has storms and weather that rival the size and scale of tropical cyclones. But rather than destruction, these storms - better known as eddies - are more likely to bring life to the sea...and often in places that are otherwise barren.
The
Moderate Resolution Imaging Spectroradiometer (MODIS) on NASA's Terra satellite captured these natural-color images of a deep-ocean eddy on December 26, 2011. The top close-up shows the vortex structure of the eddy, traced in light blue by plankton blooming in the 150-kilometer wide swirl. The lower, wider view shows the bloom and eddy in context, about 800 kilometers south of South Africa.
"Eddies are the internal weather of the sea," says Dennis McGillicuddy, an oceanographer at the Woods Hole Oceanographic Institution. They are huge masses of water spinning in a whirlpool pattern - either clockwise or counterclockwise - and they can stretch for hundreds of kilometers. Eddies often spin off from major ocean current systems and can last for months.
In the image above, the anti-cyclonic (counter-clockwise) eddy likely peeled off from the Agulhas Current, which flows along the southeastern coast of Africa and around the tip of South Africa. Agulhas eddies, or "current rings," tend to be among the largest in the world, transporting warm, salty water from the Indian Ocean to the South Atlantic.
Certain types of eddies can promote blooms of phytoplankton. As these water masses stir the ocean, they draw nutrients up from the deep, fertilizing the surface waters to create blooms of microscopic, plant-like organisms in the open ocean, which is relatively barren compared to coastal waters.
In satellite observations of sea surface height and in computer models, eddies appear as bumps or depressions in the ocean, indicating the upwelling or downwelling of water. They also can be distinguished by higher or lower surface temperatures. However, such observations were not available for the eddy depicted above.
References
Carlowicz, M. ( 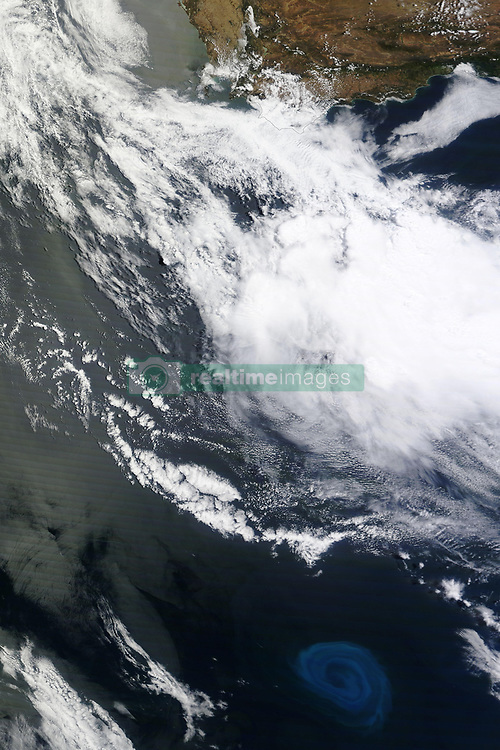