EXCLUSIVE: For lesbian couples and single ladies looking to have a baby without the expense of going through a sperm bank (which can run in the thousands of dollars), Ari Nagel is the No. 1 dad. About half the time, he provides his seed the old-fashioned way. Sometimes, a lesbian looking to conceive will have her partner in the bed for moral support while she and Nagel engage in intercourse. “She’s never slept with a guy before, so the partner’s in bed, holding her hand,” Nagel explains. “Sometimes, it could be a little painful, then after a few times, they’re comfortable to do it on their own.” Other times, he supplies his goods in a cup, which he prefers. Nagel made his first foray into professional baby-making eight years ago with a friend — a single, straight Jewish woman in her late 30s and living on the Upper West Side. “I actually tried to fix her up. I had a friend who I thought would be a better match as a sperm donor,” he says. “He got cold feet at the last minute.” So Nagel went with the woman to the fertility clinic. Then he helped out two lesbians seeking a donor on Craigslist. Other women have heard about him through friends and Known Donor Registry, a free website for those looking for sperm donors. Women who have used Nagel’s services — which he provides for free — say his good looks, personality and high sperm count are a draw. “He’s a lot of fun to be around, he loves people, he’s outgoing, and he’s gorgeous,” says Tiffany Harrison, 41, of New Jersey, who with her wife, Yvonne, has a toddler daughter, Zoe, sired by Nagel. As for his own motivations, the big daddy insists he just likes spreading his seed. “I just love seeing how happy the moms and kids are . . . That’s why I do this,” he says. “It’s the gift that keeps on giving.” **NO NEW YORK DAILY NEWS, NO NEW YORK TIMES, NO NEWSDAY**. 11 Jun 2017 Pictured: 06/11/17 Features, sperm donor, (left to right) Paige Moxey, Devin Vanderhorst, Ama 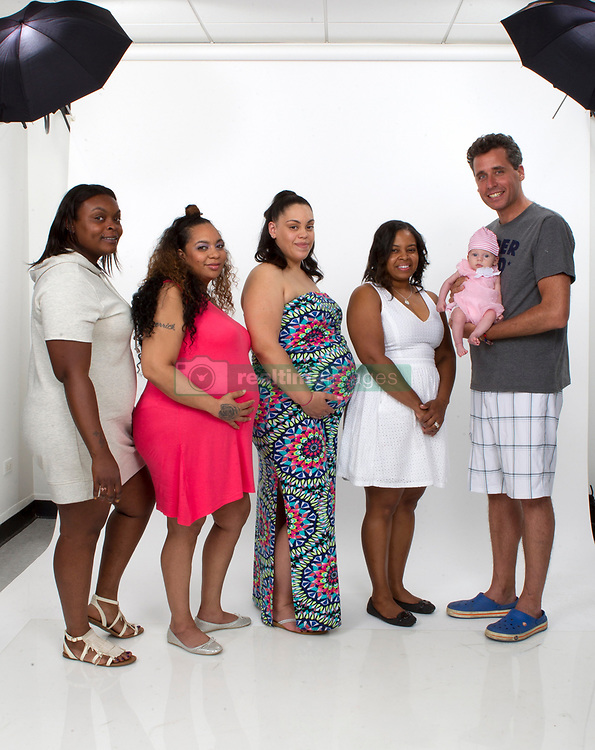