EXCLUSIVE: A Grants Pass Police case report describes the blood-soaked bust up between Meghan Markle's half-brother Tom Markle Jnr and his fiancee Darlene Blount. Tom, 51, told cops Darlene attacked him and described her as "freaking crazy", leading cops to arrest her and throw her in jail for two nights. Tom later admitted his injuries were self-inflicted. Darlene, 37, was arrested on suspicion of assaulting Tom in a boozy New Year's Eve fight. Darlene spent more than 32 hours in jail and posed for a teary-eyed mugshot. In the police case report it says Darlene called cops to the couple's Grants Pass, Oregon, home after she reported Tom was "punching himself". She fled to the garage as she was scared he was "going to hurt her". But when cops turned up Tom had "blood pouring" from an injury and was "black and blue" and he told them Darlene had attacked him. Tom also stated Darlene was upset at him for leaving her at a bar after he accused her of cheating on him. He claimed: "it hurt like crazy when she was punching me". Tom later changed his tune and said he was fine and didn't want Darlene to be charged but the cops arrested her on suspicion of assault. The Josephine County District Attorney's office declined to press charges over the incident and Darlene was released on January 2. Tom did an interview confessing his injuries were self-inflicted and he told police Darlene beat him up. He said they had both been drinking and blamed the pressure of being in the public eye. Attached is the five page police case report in which the arresting officer described the incident. Also attached is Darlene Blount's mugshot taken later that night and Tom Markle's mugshot from January 2017 when the pair had another drunken row in which Tom was accused of holding a gun to Darlene's head. She never pressed charges in that case and it was dropped. 13 Jan 2018 Pictured: Blount Police case report. Photo credit: MEGA TheMegaAgency.com +1 888 505 6342 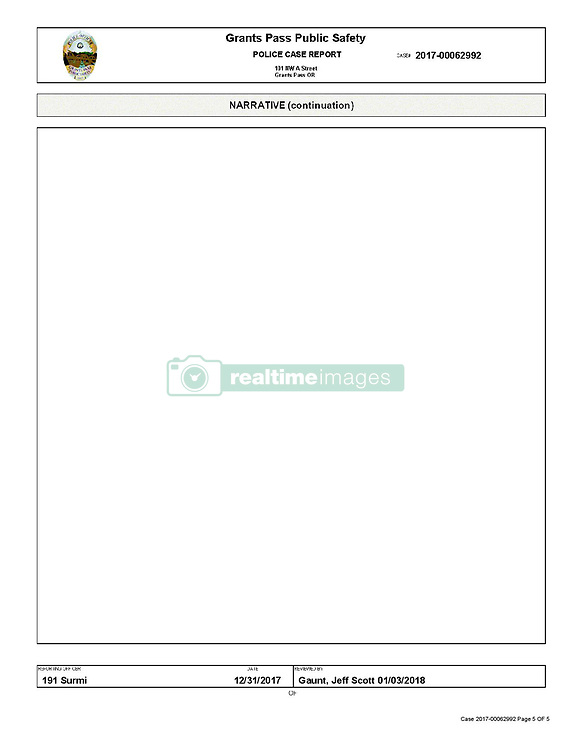