EXCLUSIVE: A 21-year-old woman delivered a baby with two heads and three hands, sending doctors of the state-run facility into a tizzy in central India. Babita Ahirwar, a resident of Basauda village in Vidisha district of Madhya Pradesh, delivered the baby around 7:30 am on November 23 through C-section. Babita was married to Jaswant Ahirwar around one and a half years ago. The couple which was eagerly waiting to welcome their first baby was devastated after seeing the infant born with a deformity. "It was a mixed feeling when the nurses handed over the baby to me. Initially, I thought it was a twin, but when the nurses removed the towel, I was shocked to see our firstborn with two heads and three hands. All we wanted was a normal and healthy baby, but the almighty wanted to punish us this way. I don't know why," said new mom Babita told Newslions. Dr Surendra Sonkar of Vidisha Sadar hospital said: "On Saturday morning around 7:30 am, we facilitated the delivery of a baby through C-section. The baby had two heads and three hands. The third hand had two palms attached to it. "There is only one heart visible in the newborn. This is a very rare condition and this is the first time. I have come across such a case in my career," he said. "We had initially kept the baby in the ICU, but we thought it was better to refer them to a better-equipped facility in Bhopal," he added. At present, the baby is undergoing treatment at Bhopal's Hamidi Medical College and Hospital. 23 Nov 2019 Pictured: Baby born with two heads and three hands in central India. Photo credit: Newslions Media / MEGA TheMegaAgency.com +1 888 505 6342 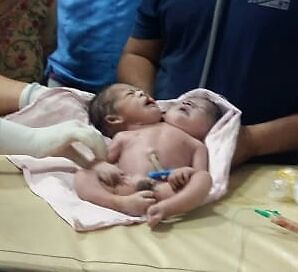