Rap mogul Russell Smmons is being sued for $5million by an aspiring film maker who claims he raped her. Jennifer Jarosik alleges she first met the Def Jam founder in 2006 in NYC after they connected over a mutual “love and passion for meditation, yoga and a vegan diet.” Jarosik claims that Simmons agreed to be interviewed for a documentary she was working on and that he agreed to co-produce, finance and assist on the documentary, which was titled “Goddesses” and focused on empowering women. According to documents, obtained by The Blast, Russell Simmons has “historically thrived on the sexual exploitation of young women trying to break into the entertainment and music industry, in which young female artists are falsely promised opportunities and advancement by experienced and well-established men in power in the industry.” Jarosik says she later moved to Los Angeles, and in August 2016 was invited by Simmons to come to his Beverly Hills home. She says upon arriving, Simmons bluntly asked if they could have sex, to which she says she replied “no.” Jarosik says Simmons “got aggressive” and pushed her onto his bed. She claims while trying to keep Simmons away from her, he knocked her off his bed and she hit her head. While still in “shock and fear,” Jarosik claims Simmons “pounced on her” and “proceeded to rape her.” Her attorney, Perry Wander, says “Mr. Simmons practices meditation, yoga and is a long time vegan practicing non violence against animals. So basically he treats animals better than women. The hypocrisy has to stop now.” As if to add one more dig against Simmons … “#TimesUp” is written in bold at the end of several pages of the lawsuit. Simmons, who has denied all allegations of sexual assault and rape, has now been accused of sexual misconduct by 8 different women. 25 Jan 2018 Pictured: Russell Simmons complaint. Photo credit: The Blast.com / MEGA TheMegaAgency.com +1 888 505 6342 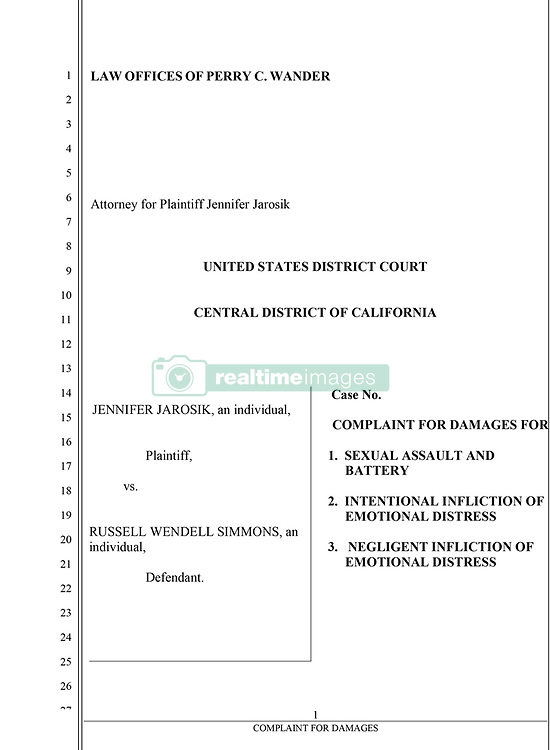