April 28, 2017 - Inconnu, inconnu - 27/04/2017 - A John Lennon outline sketch of the Beatles iconic Sgt Pepper album which he left behind when he moved home, is set to fetch up to $60,000 USD at auction.It pretty shows the found band members standing round a drum hit with the Sgt Pepper Lonely Hearst Cub name on it and the Beatles spelled out in flowers in front. Behind are figures which would be taken up by life-sized cutout of the band's heroes and people who influenced them.The classic album which this year celebrates its 50th anniversary was released in 1967s Summer of Love.The group's eighth album featured songs such as 'Lucy in the Sky with Diamonds', 'With a Little Help from My Friends' and 'A Day in the Life' Paul McCartney had the idea of the band , which had quit touring the previous year, taking on a different identity, inspired by the crazy named West Coast US band emerging at the time.Eventually British artist Peter Blake was given the responsibility of creating the sleeve which included a set of Pepper-themed cardboard cut-outsThe final sleeve was pretty much in keeping with the Lennon sketch.John, Paul, George Harrison and Ringo Starr wore shiny, brightly coloured, faux military uniforms surround by the cut-outs. Lennon's sketch showing an early scheme for the sleeve was made at the house he shared with first wife Cynthia known as Kenwood in Surrey, UK. It was here that he also wrote some of the most famous Beatles songs including 'Ticket to Ride' and 'I Feel Fine'. The Pepper drawing was found in a sketchbook left behind at the home when Lennon let in 1969 to set up home with Yoko Ono.The ink and paper drawing was recovered by the new owner. It is being sold as part of a Music Icons sales by Los Angeles specialist Julien's Auctions which takes place on May 20th this year. A spokesman said 'The astonishing sketch includes John Lennon's handwriting of the album's title on the central bass drum in the image. This sketch is one of the most significant an 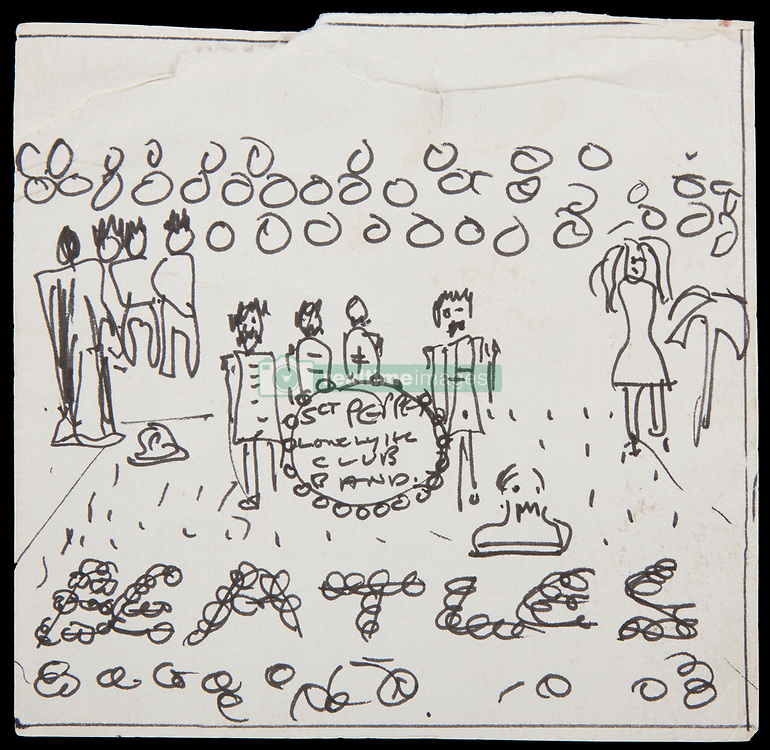