Pic from Ed Rowland/ Magnus News. Pic shows police officer Ed Rowland showing the his ileostomy bag which is covered by an armoured plate when he’s on duty. For full Magnus copy see newsdesk, or ema

EXCLUSIVE: A POLICE OFFICER WHO BEAT A DEADLY BOWEL CONDITION HAS NOW BECOME BRITAIN’S ANSWER TO ROBOCOP WEARING TITANIUM ARMOUR OVER A STOMA BAG WITH PIX By Magnus News Agency A police officer who bravely beat a deadly bowel condition has revealed he now wears RoboCop-style titanium armour to protect his tummy under the uniform. Dad Ed Rowland is a serving officer with Devon and Cornwall Police and lives with his wife Kate, also a police officer, and their three-year-old Maggie. Ed’s ordeal began in 2006 – two years after joining the police - when he became ill after a lads’ holiday to Turkey in his early 20s. What he thought was a typical holiday tummy bug soon became a nightmare with constant pain and bleeding from a condition later diagnosed as ulcerative colitis – a form of inflammatory bowel disease. After almost a decade of pain and discomfort doctors told Ed they could do no more and his large intestine was removed – meaning he now has to wear an Ileostomy bag. Because of his frontline role as a custody sergeant Ed, 36, needs protection and he found it in the form of specially built US titanium armour which covers his stoma bag. He said: “When I’m wearing the titanium armour it does make me feel a bit like RoboCop. I must be the only titanium armoured police officer in Devon, or perhaps the country. “Like the film said; I’m part man, part machine, all cop. “Thankfully, our guests in the custody suite know I’m only here to help.” Ed was able to come up with the armoured solution with support from colleagues, his wife Kate, who is also a police officer, and the National Disabled Police Association. He said: “I did some research and found something from the US called Ostomy Armor (sic), which protects the stoma bag with a titanium armour and a Kevlar cover. “It was developed over in the US mainly for veterans from the military, so they could carry on working and do sports and stuff. “I said (to the Force) this is an option, would 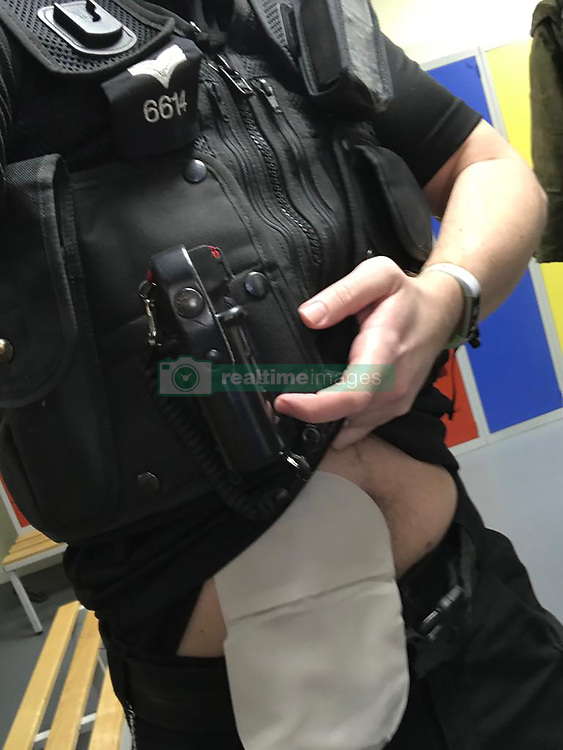