HEARTBREAKING picture shows man break down and hold his baby after he survived car crash by wearing his seatbelt but daughter and mother were killed.. .Thailand, like most countries in the world, requires drivers and passengers to wear seat belts where fitted. Unlike a lot of countries however, enforcement of the law, and even understanding of it, fall well short of international standards.. .This situation was only too well evident recently in the Pravetdistrict of Thailandâ€™s capital Bangkok when a mother and her toddler were both killed in what should have been a survivable accident.. .Twenty six year old Sorosak was driving his pickup in the early morning delivering goods to varnious locations around Bangkok. As is often the case he was accompanied by his wife Yureeporn and their two year old baby.. .He said â€œI was driving at around 100kph when I started to overtake a truck only to find another truck parked on the right hand side verge. When I tried to return to my lane another truck was coming towards me so I decided to brake and go onto the left side verge. But my pickup was heavily loaded and the brakes had little effect. I hit a tree and knocked it down before hitting a second treeâ€. .Investigating officers reported that Sorosak had been wearing a seat belt but his wife was not and, worse still, she had her baby on her lap..Â©Thai rescue service/Exclusivepix Media (Credit Image: © Exclusivepix media via ZUMA Press) 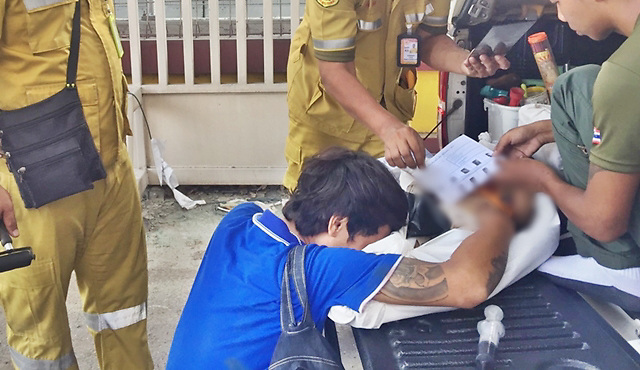