November can be a stormy month in the Great Lakes region, as it was again in 2015. Toward the middle of the month, a low-pressure system and cold front swept up from the Central Plains and across the lakes. In Detroit, media outlets reported wind gusts as high as 52 miles (84 kilometers) per hour that left 13,000 residents without power. On Lake Erie, gale force winds halted shipping.
Winds were not the only reason ships sought safe anchorage. The high winds created a seiche - a large standing wave that occurs when strong winds and a quick change in atmospheric pressure push water from one end of a body of water to the other, according to NOAA. Seiches occur periodically on Lake Erie. In 1844, a 22-foot seiche breached a sea wall with deadly consequences. In 2008, Buffalo was flooded by waves that measured 16 feet. That's about the height of the seiche measured by a buoy at the lake's east side on November 12, 2015.
Two weeks after the seiche, its effects were still evident. On November 25, 2015, the Visible Infrared Imaging Radiometer Suite (VIIRS) on the Suomi NPP satellite acquired this natural-color image of colorful green and tan swirls.
"The seiche stirred up a lot of sediment," said Kevin Czajkowski, a remote-sensing scientist at the University of Toledo. Not all of the colorful swirls are necessarily the result of resuspended sediments. "I wonder if Lake Erie is having a whiting event as well."
Particles of calcium carbonate in the water can cause lightening, or "whiting," of the water. That usually happens in response to changes in the water temperature, or due to increased photosynthesis by phytoplankton and other microscopic marine life.
But Thomas Bridgeman, an environmental scientist at the University of Toledo, agrees that the swirls of color are mostly due to sediments. "Little patterns along the shoreline suggest wind-driven sediment resuspension," he said. "There is an olive-green tint to part of the image that might be a diatom bloom, but I think t 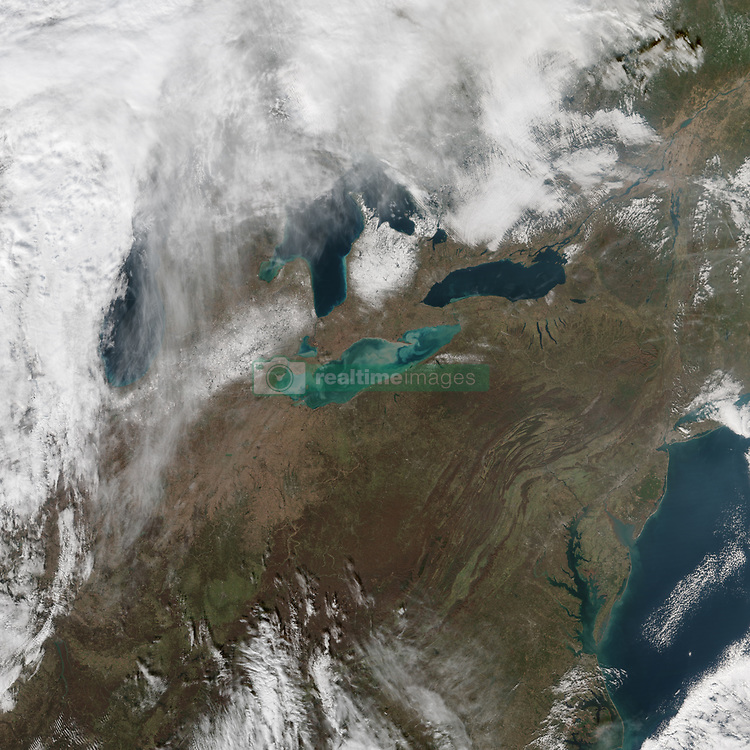