View Image Comparison
View Both Images
Fog is common in winter in northwestern North America. Moist Pacific air rides up into the Cascade Mountains, the Coast Range, and the Columbia Plateau, then cools at altitude or at night and sinks into the surrounding valleys. As that air gives up its heat to the upper atmosphere, the layer near the surface becomes saturated (reaching the dew point) and essentially forms clouds at ground level. Often a temperature inversion - warm air, higher in the atmosphere, moving over the cooler denser air near the surface - will trap this moisture in the valleys for days.
Such fog would have been easy to see in late November 2015 if you were standing in any of those valleys. And it would not have been hard to distinguish fog from snow if you were standing in it. But the line between snow and fog might have been tougher to spot if you were looking across one of those valley at the fresh snow on the mountains. It can be hard for satellite eyes, too, when viewing things as the human eye sees them.
The Moderate Resolution Imaging Spectroradiometer (MODIS) on NASA's Terra satellite acquired these images of Oregon and Washington at 11:20 a.m. Pacific Standard Time (19:20 Universal Time) on November 29, 2015. The top image shows the region in natural color, as the human eye would see it. Note how snow and clouds can be difficult to distinguish from each other. The second, false-color image was composed from blue and shortwave infrared light (MODIS bands 3-6-7, or 479 nm: 1,652 nm: 2,155 nm). Scientists turn to these wavelengths to reveal what the human eye cannot. Turn on the image comparison tool to see the difference.
Fog is liquid water, while snow is ice; fog droplets are much smaller than ice crystals. Those distinctions are visible from space with the MODIS radiometer. In natural color, condensed water - liquid or solid - does not absorb light, so it reflects equally at all wavelengths and appears white, explained Robert Pincus, an atmosp 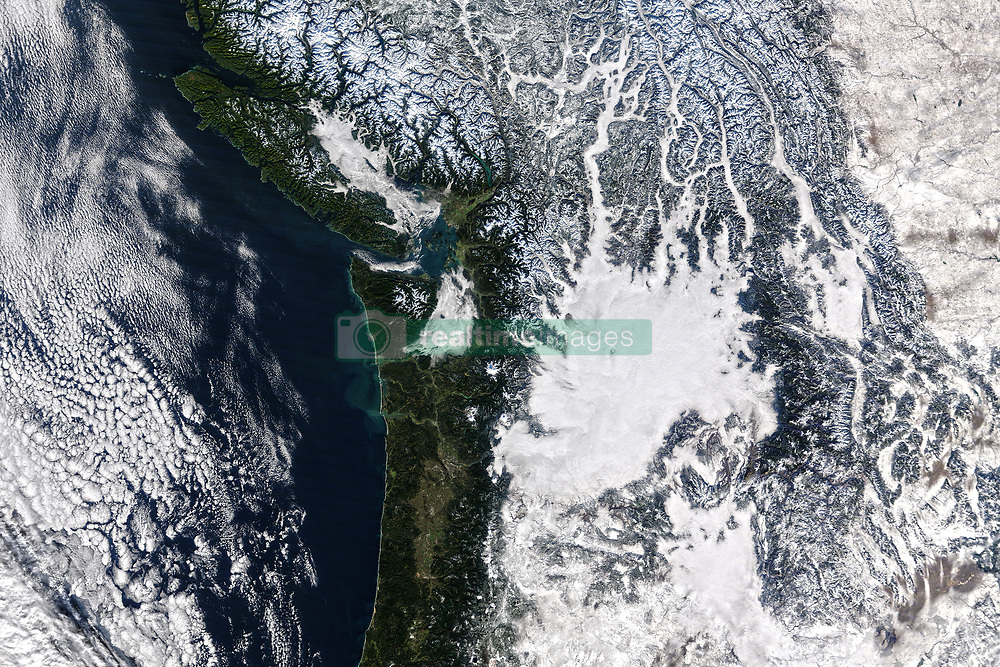