Dr Anil Saini who operated on Bhola Shankar shows the times extracted from his patient's stomach at a state-run hospital in Bundi, Rajasthan, India.

EXCLUSIVE: By Sudipto Maity in India An Indian man complaining of stomach ache had over 100 iron nails removed from his intestine by doctors. The operation took place on Monday in the country's north west Rajasthan state. Reports said 42-year-old Bhola Shankar had reached the government hospital in Bundi town , complaining of excruciating pain. However, it was after conducting the initial tests that doctors were left baffled. X-ray of the patient showed a cluster of a rather unusual item in the man's stomach. A CT scan confirmed the suspicion. Operating on the patient, a team of surgeons, led by Dr Anil Saini, recovered and removed at least 116 iron nails. The team also shot a video of the operation, which showed nails being extracted from the intestine of the patient. Saini said, "This is the first such case I have come across," The doctor added it may be the first time something like this took place in Rajasthan. In 2017, doctors had removed at least 150 stationary pins from a patient's stomach in the same town. "What surprised us was the length of the nails. They measured 6.5 centimetres. To have such big iron nails removed from a patient's body is unprecedented," the senior doctor added. He also called it a bizarre case. Meanwhile, doctors have deemed the patient mentally imbalanced. "The patient is not able to narrate how the nails ended up in his intestine," Saini said, adding, "He is lucky the sharp objects did not puncture his organs, else, it could have proved fatal." The patient's younger brother said the former has been taking medicine for mental illness for the last two and half decades. However, he too couldn't explain how the nails ended up there. Doctors believe the man was in the habit of swallowing sharp objects as apart from the nails, doctors also extracted metal wires. Despite the lengthy operation, the patient was recovering well. 13 May 2019 Pictured: Dr Anil Saini who operated on Bhola Shankar shows the times extracted from his patient's stoma 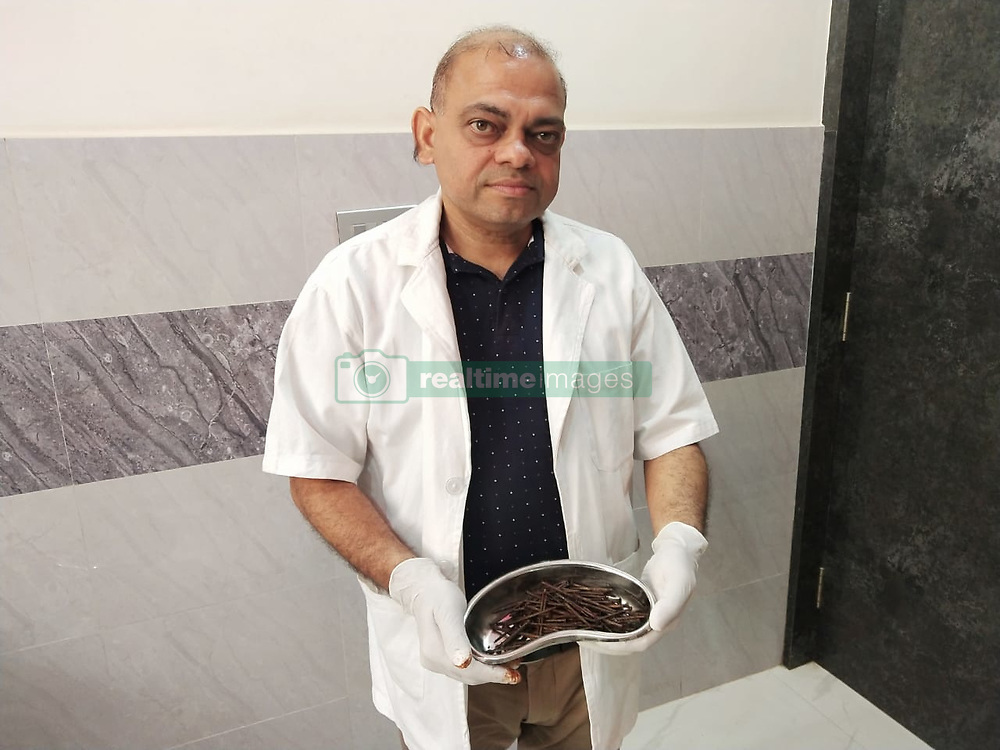