May 30, 2017: File Photo: VILI FUALAAU filed for legal separation from his wife and former 6th grade teacher, MARY KAY FUALAAU, formerly Letourneau, a married 34-year-old teacher and mother of four in Seattle in 1996 when she began an affair with Fualaau, her 13-year-old student. The couple is 22 years apart in age. Mary Kay gave birth to her young lover's child before she went on to serve more than seven years in prison on charges related to their sexual relationship. Pictured: Apr 13, 1998 - Seattle, Washington, USA - EXCLUSIVE! Call for Price! VILI FApr 13, 1998 - Seattle, Washington, USA - VILI FUALAAU prays in his room at his mom's house. Vili who has a daughter AUDREY, by teacher Mary Kay Letourneau. VILI FUALAAU was 13 in 1996 when he began a relationship with his teacher Mary Kay Letourneau, a 34-year-old married mother of four. Letourneau and Fualaau had two children together, Audrey and Georgia. After pleading guilty to child rape on November 14th, 1996, Mary Kay LeTourneau was sentenced to six months in jail and three years of counseling. She was released early on good behavior, but later arrested again on February 3, 1998 after being found having sex with Fualaau in a car. Mary Kay Letourneau has served her 89 month sentence and is released from prison August 4, 2004. (Credit Image: © Scott Mc Kiernan/ZUMA Press) 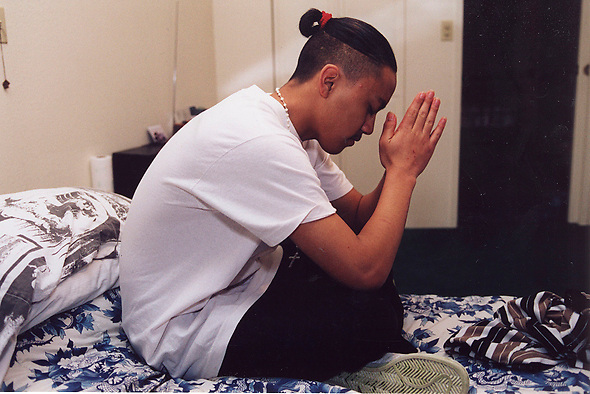