Dust and sand storms in the Middle East and other arid regions tend to come in two forms. Haboobs are dramatic events associated with storm fronts and often appear as walls of sand and dust marching across the landscape. But like thunderstorms, haboobs tend to abrupt and short-lived. Then there are the long-lived, wide-reaching dust storms that can last for days. In Iraq, such storms are often associated with the shamal, a pattern of persistent northwesterly winds.
In early September 2015, a storm with characteristics of both the shamal and the haboob moved across Iraq, Iran, and the Persian Gulf region. The Moderate Resolution Imaging Spectroradiometer (MODIS) on NASA's Terra satellite captured these natural-color images of the dust storm on September 1 and September 3, 2015.
The dust event first appeared in NASA satellite imagery along the Iraq–Syria border on August 31. By the next day, the storm took on the cyclonic shape visible in the top image above. By September 2, the dust cloud reached the Persian Gulf. It had spread out across the entire basin by the time of the September 3 image above.
The storm appears to have been triggered by a surface low-pressure system that moved from northwest to southeast during the week. The cyclonic circulation around the center of low pressure is most obvious in the September 1 image. Weather data from ground stations in Baghdad, Khormor, and Al Asad confirm the wind circulation pattern. But the overall movement of the system from the northwest toward the Persian Gulf also suggests late-summer shamal winds.
Much of northern Iraq has been in a state of exceptional drought. Anecdotal evidence and media reports in recent years suggest that dust storms have become more common in Iraq and Iran, a result of that drought and of the human and natural destruction of wetlands in the Tigris-Euphrates watersheds.
News reports and social media chatter in September 2015 described wind gusts up to 80 kilometers (50 miles) per hour in Iran 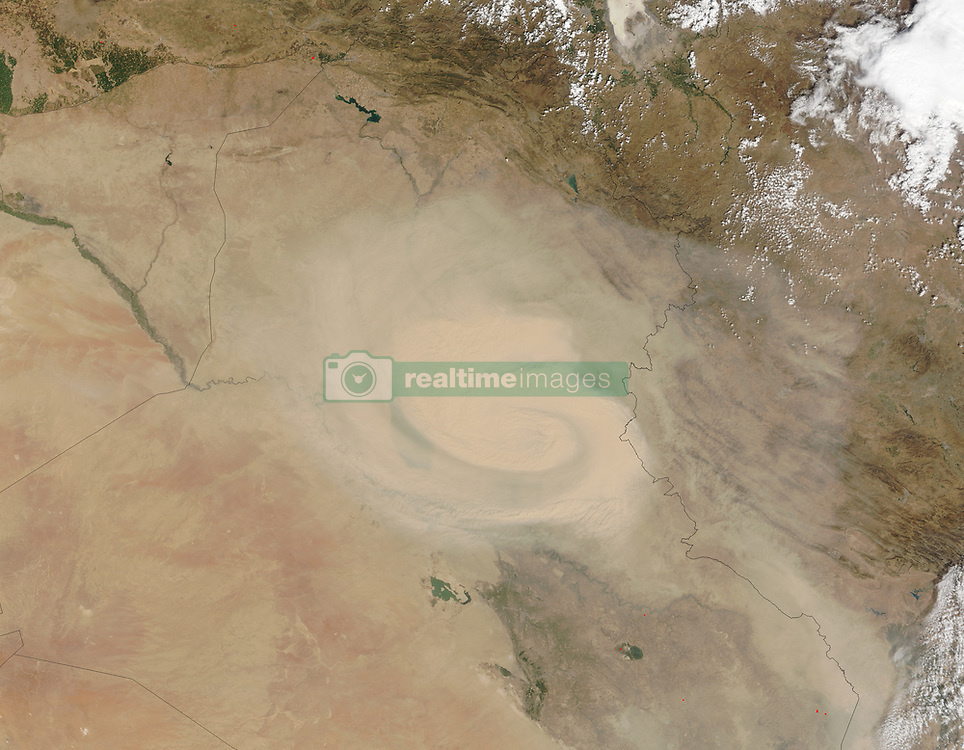