Tiger Woods was arrested driving just a few miles from his Florida home and the town where he owns a sports bar at 3am on Monday morning. Locals say the 41-year-old mult-millionaire golfer is a regular visitor to The Woods, Jupiter, which is a ten minute drive from his home at Hobe Sound, in South Florida. It is not known whether he had been there on the night of his arrest. Woods, who last week expressed his desire to return to competition after his recent back surgery, was headed southbound on Military Trail, south of Indian Creek Parkway, when police said he was seen driving erratically. Cops said he was ‘arrogant’ after being pulled over. It is not known if he was alone in his 2015 Mercedes or if he was under the influence of drugs or alcohol. In August 2015, he opened a restaurant at Harbourside Place, which is a modern upscale sports bar. It boasts of being a place to ‘celebrate like a champion.' The 14-time major champion has not played since he withdrew from the Dubai Desert Classic on Feb. 3. Woods, who has earned more than $110 million on Tour with 79 victories since 1996, has played in just one event this year and pulled out of The Masters. Woods’ clean-cut image came apart on Thanksgiving night 2009 when then-wife Elin Nordegren chased him out of their $2.4 million Florida mansion with a golf club after learning of his serial cheating. Woods crashed his car, opening the floodgates of stories about his wild sexcapades. He eventually entered rehab for sex addiction. Woods and Nordegren’s divorce was finalized in 2010. 29 May 2017 Pictured: The Woods Jupiter. Photo credit: Michele Eve Sandberg / MEGA TheMegaAgency.com +1 888 505 6342 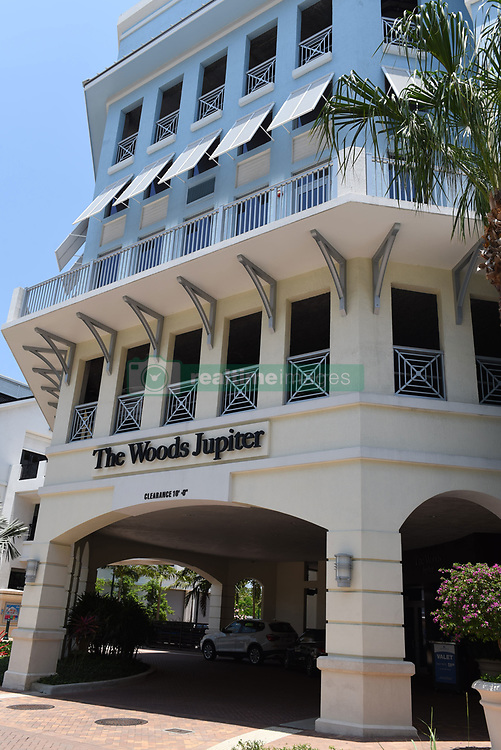