BREAKING NEWS: Several people are injured as explosion on Tube train in west London sends 'fireball flying down the carriage' setting commuters on fire as armed police race to the scene..Terrified commuters 'ran for their lives' after an explosion on a London Underground train this morning..People fled in panic and jumped out train doors after a 'fireball flew down the carriage', leaving several passengers with serious facial burns on the packed rush hour train in Parsons Green, west London..There were reports of a man at the station with a knife in the aftermath of the explosion. Scotland Yard said they believe this is unrelated to the Tube incident but are investigating and urging people to avoid the area..One witness told the BBC there was a 'bang' and then a 'wall of flames', which spread through the packed carriage. .The doors opened at Parsons Green and the commuters, many of them with scorched faces and hair, ran off screaming..Armed Police, paramedics and firefighters were all said to be at the west London station within five minutes of the explosion at 8.20am today. .Pictures from the District Line train show a burning plastic bucket stashed in a Lidl carrier bag, which is said to have exploded and sent a fireball down the carriage..A photograph of the flaming white bucket taken just after it exploded shows a number of wires protruding out of the top and on to the train carriage floor - but police have not yet confirmed if it was a bomb..Â©Exclusivepix Media (Credit Image: © Exclusivepix media via ZUMA Press) 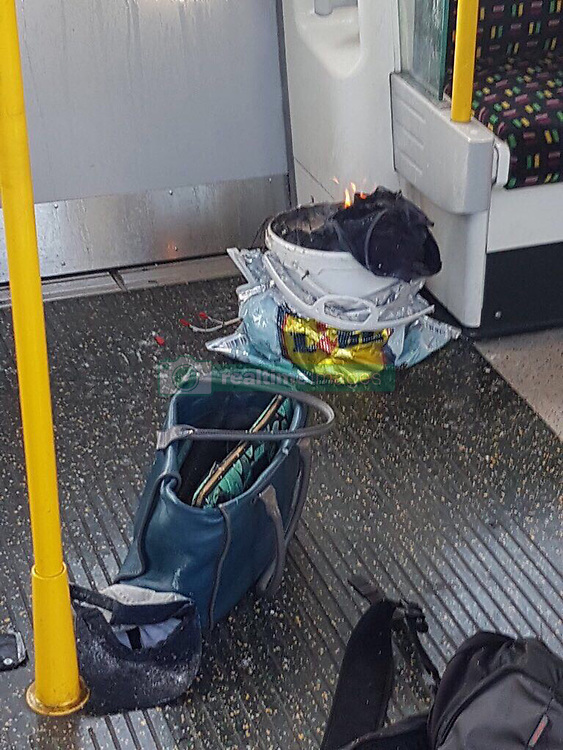