Hurricanes in the Atlantic Ocean typically start to develop off the west coast of Africa, then move westward across the basin and intensify as they approach North America or the islands of the Caribbean and Gulf of Mexico. In the last days of August 2015, that storm development process went into overdrive.
On August 30, an easterly wave from the African interior moved out over the Atlantic, where sea surface temperatures hovered around 30° Celsius (86° Fahrenheit). The unusually warm waters provided fuel for a storm that progressed from tropical depression to tropical storm to hurricane in roughly one day.
According to several reports, Fred appears to be the easternmost hurricane to form in the tropical Atlantic during the satellite era. (Extra-tropical Hurricane Vince formed briefly off Portugal in 2005.) It is also believed to be the first hurricane to hit Cabo Verde (Cape Verde) islands since 1892. The storm did not cause any casualties, nor did it make direct landfall on any of the islands, but it did cause flash flooding and extensive wind damage. As much rain was predicted to fall in one day as the islands typically receive in half a year, though totals are not yet available.
The Moderate Resolution Imaging Spectroradiometer (MODIS) on NASA's Terra satellite acquired this natural-color image of Fred off the west coast Africa at 11:15 a.m. Cabo Verde time (12:15 Universal Time) on August 31, 2015. The storm was at peak intensity when the image was acquired, with sustained wind speeds of 75 knots (85 miles or 140 kilometers per hour) and a central pressure of 986 millibars. It was a category 1 storm on the Saffir-Simpson scale.
The MODIS instrument on Terra got a look at Fred's remnants on September 1. Now a tropical storm, it is expected to linger for much of the week and slowly devolve into a tropical depression as it moves north and west.
References
BBC (2015, September 1)
Hurricane Fred hits Cape Verde. Accessed September 1, 2015.
Bloomberg News (2015, Sep 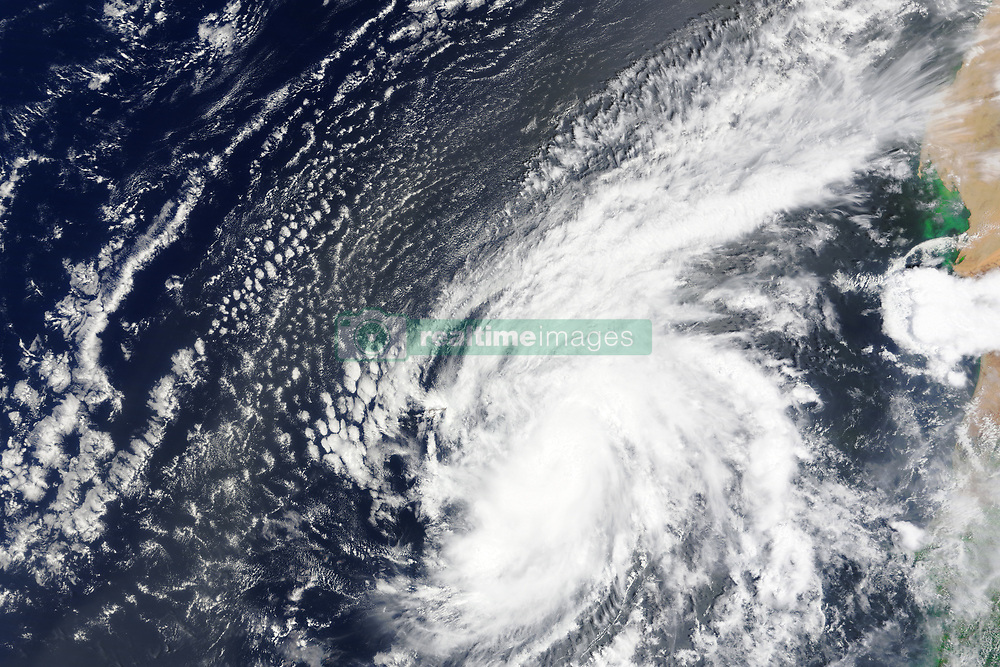