Many national parks in the United States can be experienced by driving scenic roads or hiking on trails. Visit Biscayne National Park in southern Florida, however, and you might want to explore by boat; 95 percent of this park is under water.
On February 25, 2016, the Operational Land Imager (OLI) on the Landsat 8 satellite acquired this natural-color image of Biscayne National Park. The park encompasses the northernmost Florida Keys, starting from Miami to just north of Key Largo.
The keys run like a spine through the center of the park, with Biscayne Bay to the west and the Atlantic Ocean to the east. The water-covered areas span more than 660 square kilometers (250 square miles) of the park, making it the largest marine park in the U.S. National Park System. Biscayne protects the longest stretch of mangrove forest on the U.S. East Coast, and one of the most extensive stretches of coral reef in the world.
acquired February 25, 2016
acquired July 10 -
14, 2001
download large image (21 MB, JPEG, 10000x18000)
acquired July 10 -
14, 2001
download
GeoTIFF file (21 MB, TIFF, 10000x18000)
Some of what lies below those waters is visible in data acquired by the Experimental Advanced Airborne Research Lidar (EAARL). EAARL's Lidar measured the time it took for a pulse of light to go from the aircraft, through the water, reflect off the seafloor, and back to the airplane. Researchers can convert that travel time into measurements of height, and map the underwater topography. According to C. Wayne Wright, a remote-sensing scientist who worked at NASA's Wallops Flight Facility, EAARL was designed and built by NASA specifically to get a high-resolution look at coral reef environments.
The highlighted area in the second image above shows where EAARL acquired data in Biscayne National Park from July 10–14, 2001. The third image shows a detailed view of the center of the study area. White and light blue are the shallowest areas, primarily marking the location of coral reefs. Some 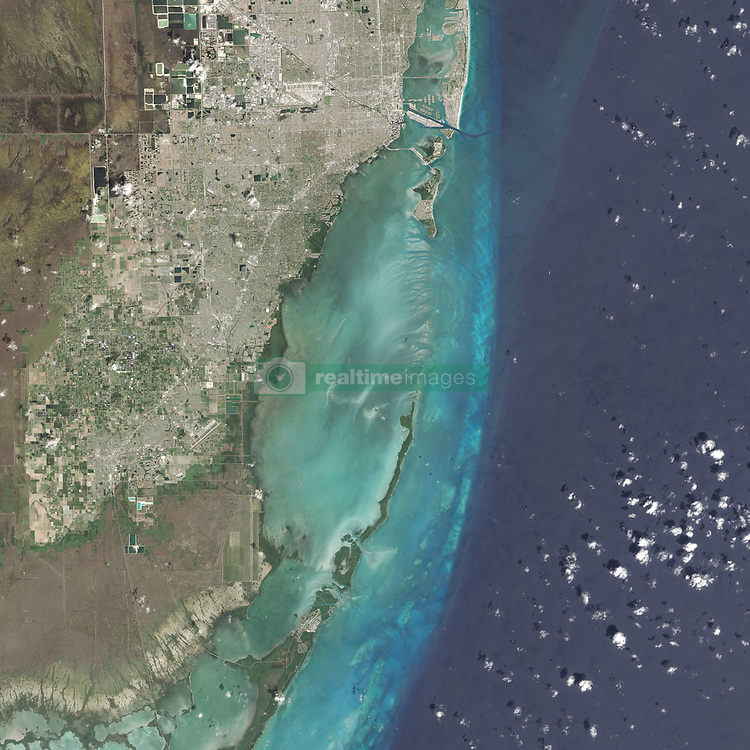