November 15, 2018 - Paradise, California, U.S.: Arrested for trying going home! Paradise resident, CHARLIE MILES, 27, was sitting cross legged on the ground in handcuffs, with state rangers around him, after being arrested for trying to go home, Thursday. Miles, was on a desolate stretch of Skyway Road about halfway between his family's home, in the devastated town of Paradise and the church shelter in Chico, where he has been sleeping on a cot. His crime was trying to go back home. Miles was trying to see if anything was left of his and his parents trailers. Miles rose on the morning of Nov. 8 at 5:45 am. “I had coffee with my parents like I always do,” he said. “Then I was brushing my teeth and I looked up at the sky and it was gray. At that point, I started packing their stuff.” The flames soon chased them. “I was forced to drag everyone off the property,” he said. “My dad was helping my mom and I was carrying their belongings. There were trees exploding. People were trying to drive their cars out but they couldn’t. We have lost absolutely everything we owned,” The officers drove him back to the Chico City limits and set him free. “They didn’t give me a ticket or anything,” Miles said. He said a friend was able to return to their street and told him, everything is gone. Miles and his parents are but one of scores of victims of the deadliest wildfire in California history, the Camp Fire started Nov. 8th at crack of dawn, its death toll grew today to 77, while the number of people unaccounted is over thousand people. The blaze is now, two-thirds contained, after consuming some 150,000 acres. (Credit Image: © Renee C. Byer/Sacramento Bee via ZUMA Wire) 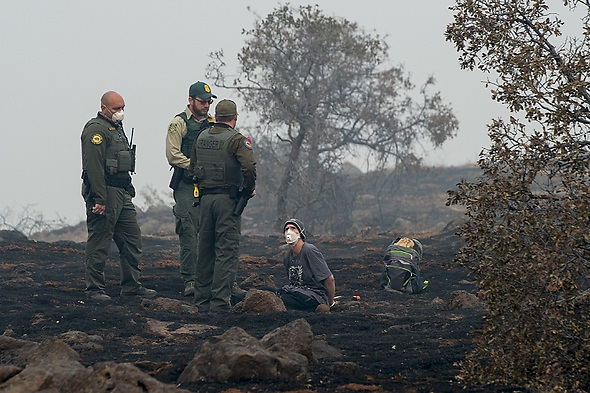