May 30, 2017: File Photo: VILI FUALAAU filed for legal separation from his wife and former 6th grade teacher, MARY KAY FUALAAU, formerly Letourneau, a married 34-year-old teacher and mother of four in Seattle in 1996 when she began an affair with Fualaau, her 13-year-old student. The couple is 22 years apart in age. Mary Kay gave birth to her young lover's child before she went on to serve more than seven years in prison on charges related to their sexual relationship. Pictured: EXCLUSIVE Aug 26, 2003; Seattle, WA, USA; This Image For Newspaper Use Only ! All Other Media MUST CONTACT ZUMA HQ 949-481-3747. ASK FOR TRISH. EXCLUSIVE! TABS OUT! MARY KAY LETOURNEAU, a teacher who had sex with her former sixth-grade student, is expected to be released from prison Aug. 4, rather than this month, according to the Washington Corrections Center for Women. Letourneau received national attention for having two children with her former student, Vili Fualaau. He was 12 and she was a 34-year-old married mother of four when their relationship began in 1996 in the Seattle suburb of Burien. Pictured: Mary meets with her daughter AUDREY during a prison visit (Credit Image: © Oona Copperhill/PeninsulaGateway/ZUMAPRESS.com) 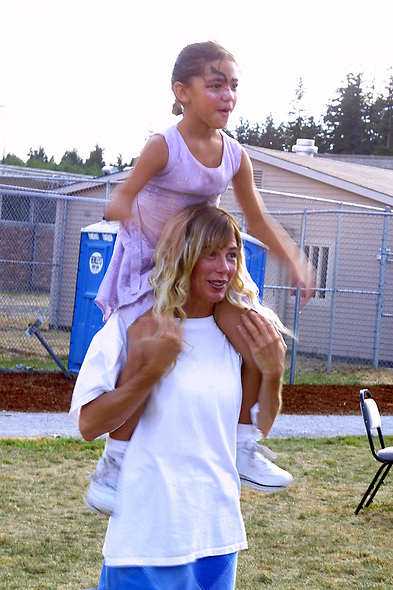