View from sitting area towards the bar / kitchenette

Investigators have released dramatic new photos of the Las Vegas hotel room from which Stephen Paddock murdered 58 people. Images show Paddock hid a camera in a food cart outside his room, as well as mounting one on the door’s peephole, proving he was keeping an eye out for anyone trying to get into his room. There is a also a close up photo of the broken window through which he fired his assault rifles, which more images showing the guns and ammunition littered around his room. After unleashing a tirade of bullets on revelers at a music festival below, killing 58, Paddock committed suicide by shooting himself. The massacre, which happened on 17 October, 2017, is the deadliest mass shooting by a lone gunman in U.S. history. 23 Jan 2018 Pictured: View from sitting area towards the bar / kitchenette. Photo credit: LVMPD/ MEGA TheMegaAgency.com +1 888 505 6342 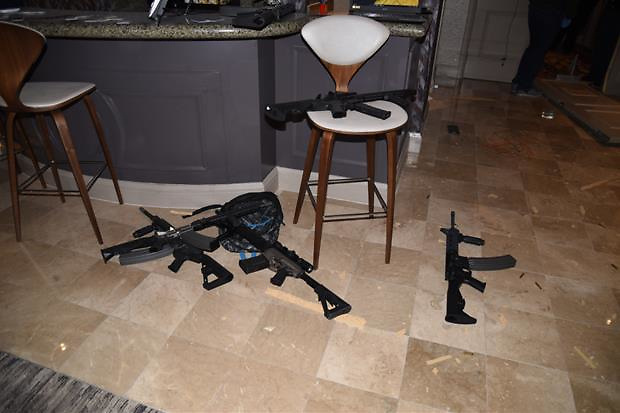